Home » Baby Ahrens » Babies on a Plane: Two Under Two

Alternately titled…only the prepared survive! I just arrived home from a quick trip to Iowa to surprise my mom for Mother’s Day. Sorry to my Facebook peeps but this one is too good not to share again!

I was flying solo this time since Matt had some work obligations and has been studying like crazy for the CFA test. The trip with both minis in tow was shockingly smooth and uneventful. I’m sure that will change once Harper is walking but I’ll take a win where I can get one! Here are a few things that made our travels breezy! 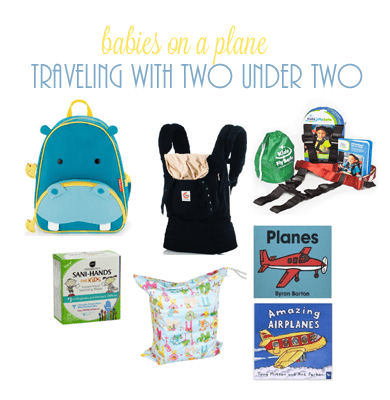 After pressing purchase on the airplane tickets I had a minor panic attack thinking what have I just done? I pretty much went through every possible scenario and packed accordingly. I did manage to snag flights that were pretty perfectly timed with the kids’ nap schedule. We left LAX at 8:20 am to Vegas and took off from Vegas at 11:30 am. I made sure to pack Hudson snacks and lunch so he was able to eat on the plane. I didn’t pack as much food flying home and I ended up paying $5.47 for 3 ounces of grapes at our layover. Annoying. Don’t forget that you can bring liquids when you’re traveling with kids. Pack up all of the milk and water you need. We have insulated sippy cup that keep milk cold for 8 hours. Worked like a charm.

Kiddie backpack: This may not be an intuitive choice since no one wants to carry around more luggage but it was actually a lifesaver. I packed Hudson’s books/toys/snacks in it to avoid making my diaper bag 100 pounds. Once on the plane I just handed it to him and he could pull out whatever he wanted or needed instead of having to dig around my bag. I thought he would be able to carry it down the jet bridge himself but he promptly fell over backwards when I strapped it on him the first time. Better work on that upper body strength buddy!

Books: Lucky for me the Target dollar spot was Cars/Planes themed the week before we left. I grabbed a few $1 books and coloring activities and we were set. I try to reserve the iPad for level 10 meltdowns.

Ergo: My love knows no bounds for this carrier. I strapped Harper in it for the whole trip. That let me just bring the single stroller instead of our behemoth double. I’m not against bringing the double stroller but since I was alone I needed to be able to collapse it by myself and corral the kids.

Cares Harness: This was a major game changer. It is FAA approved and adapts to the airplane seat belt to form a harness. Hudson just thought he was in a carseat or stroller so he never made an attempt to escape from his seat. If you buy one thing for traveling with kids, this should be IT! Bonus points for the hilarious animal neck pillow.

Wetbag: This is the one item I wish I had packed. If you follow me on Twitter you know that Harper had a serious diaper situation on the way home. It included carrying her back to our seat in only a diaper. Airplane sick bags will totally work in a pinch though. #momfail

Sani-wipes: I love these for everyday but are perfect for traveling. They’re individually wrapped and you can wipe down the seat/window/tray table that your kids will definitely end up licking at some point.

Other tips…I always like to board early so we can choose our seat (flying SW) and we have a better chance of getting a row to ourselves. Most other passengers avoid babies like the plague. I got a lot of “you’ve got your hands full” and “are you crazy?” comments. Good times. I also rented Hudson’s carseat from the rental car company. Again, I’m not against bringing our own (I actually checked Harper’s) but I knew his bulky toddler seat would be way too much for me alone.

So, I think that’s all of the wisdom I have to impart on you dear readers for now. Obviously, I’m no expert in traveling with babes in tow but I’m pretty proud of how we managed this first go-round. Travel warriors, share what you know!

You may also enjoy:

Ahrens in your Inbox